During class on Tuesday, we performed the compiled Jamie Long show and were asked the question, “Well, what the fuck was that about?” and then given the task of figuring that out by making a statement to frame the show, give it some structure, and unify it…somehow. Ensemble members A and J created our statement that night: “The chaos of ineptitude is quieted by laughter”. The statement really is a way to satisfy the fact that the show doesn’t have much of a through-line besides uncomfortably long bouts of laughter and a great deal of performed amateurism. This idea of “performed amateurism” comes up a lot. I think it first appeared as an idea from Jamie and has been reiterated by the rest of the ensemble (myself included). At the moment, it feels like a dangerous concept. It’s one that makes excuses for ineptitude, for doing things half-well, and could potentially keep us from attempting to do something impeccably, for aiming higher and pushing past the funny/amateur, into the realms of the virtuosic. The virtuosic is another Jamie concept, and it hasn’t been forgotten about, it’s just always more challenging to achieve it. The performed amateur gets away with half-decent, because it’s funny and its easy, but it could easily be nothing more than a one-trick pony.

With this guiding statement, the JL show got a bit more structured on Tuesday and Wednesday, and then we didn’t pick it up again on Thursday or Friday. It was revisited briefly over the weekend, though not changed much. Everyone seems to be tiring of this fake show.

The evening rehearsals this past week focused a lot of generating more bits and pieces, still working quite broadly and with different approaches. We tried to give people more space to just try things out, without much constraint (of time, theme, approach, etc.). This seemed to allow for more experimentation to emerge, and the pieces that came out of this unstructured time encompassed more than just written text. There were songs and sound experiments, disturbing stories, and movement pieces.

B and R, the other two Artistic Directors, led an exercise on Tuesday where we all passed around our notebooks and got everyone to write one thing they would like to see each of us make. This was a great thing to do, as it got the group thinking about everyone’s strengths and habits, and I think many of us generated our task for each person by considering opposites as well as desires. I received a list with five proposals to create and perform a piece of text, three proposals to perform a song, and one proposal to create a movement piece with sound from anywhere other than an instrument or my voice. The list makes my tendencies towards movement and the body pretty apparent, as well as a unanimous desire to see me go against it. It’s a good list to keep in my back pocket, and a reminder to take risks and play against strengths and habits. This group loves text. I’m not going to deny them that, but together the ADs need to push for really good text if it’s going to play a big role in the work. And maybe that’s about including really strong found texts, from various sources, rather than relying on texts written by the group.

D and I led an exquisite-corpse style text exercise on Thursday, in which ten pieces of paper were passed around in a circle, each person picking up the thread with only a piece of the previous sentence as context. We produced ten meandering, bricolaged texts that actually had some strange themes, refrains and imagery. These texts we used as starting points for two five-person group pieces, which we worked on over Thursday and Friday. We also took some time on Thursday to compile all the bits and pieces we had created so far onto a sheet of paper. There were maybe 30 or 40 altogether. It’s a lot, and there will be even more, and it’s overwhelming to try to isolate themes or recurring ideas at a point that still feels early (and we are worried to, to put too much of a constraint on it – a big discussion from today). We’re in this phase where we are making and experimenting and throwing things against the wall and we have yet to see what is going to pull all this material together, thematically or structurally. Last night, reading Invisible Things by David Harradine, this paragraph stood out, and made me realize that this is par for the course, terrifying and reassuring at once. 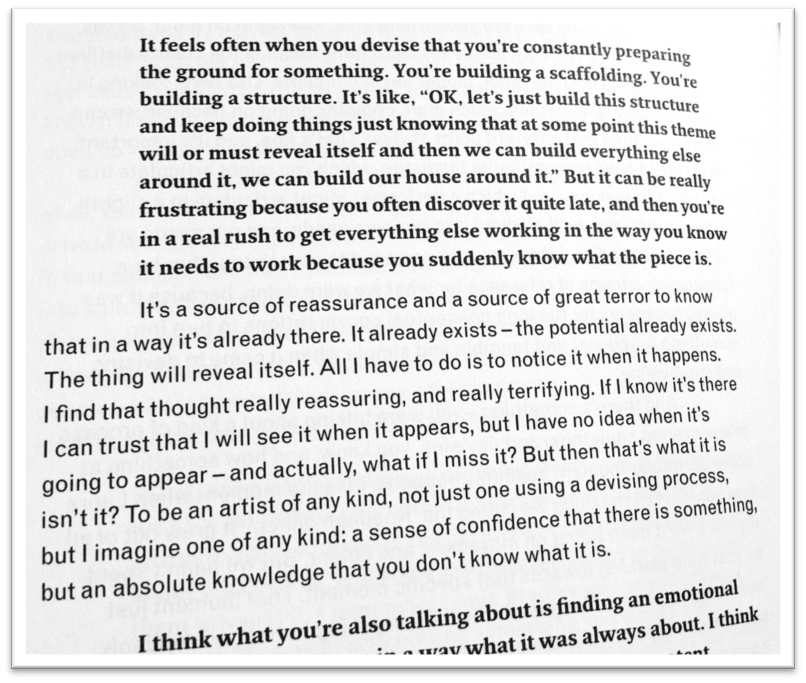 I led a training session on Thursday night, which focused on group movements and proposals, journeys, images that were collective, rather than solely individual. For me, the session was a valuable lesson in losing and regaining control, as the group went in all different directions the moment I turned on the music (Mozart makes everyone want to be a ballet dancer, apparently) and I let this happen…they played and moved and then I remembered that I was the only one who could snap people out of it and get them back together. So I did, and we went on to explore the space together as a group, and find some worthwhile moments and images. We revisited some of them following the training, and hopefully will come back to them. The group seems to be getting something out of this kind of work, and appear to be taking it into their other proposals. I want to spend more time drawing moments from training and really working them into actual etudes, which I will hopefully try to do this coming weekend.  I also want to do some improvisation stuff with them. We’ve only really done it once coming from a Viewpoints exercise D led early on, and I think we need to do it more, while we still have time to play.