I’ve had over a week to digest Art in the Open, and I’m about to start posting more photos on the projects page. The piece was a success. The ringing red rotary dial phone was very well received by the public (I just can’t let go of that pun!) and I had so much fun (as did Adam and a slew of other occasional ringer operators) playing with passersby; pressing the single-button remote control to make the phone ring and surprising them and watching their interactions with it…picking it up, listening, hanging up, repeat. I was impressed at how long people stayed with the piece, taking time to listen to the 4 minute track and sharing the experience with others. There were frequent lineups as people waited their turn to hear the voice on the end of the line!

The installation and performance component also intrigued audiences, though perhaps the connection between the two elements could have been strengthened. Closer phone placement to the installation may have tied these two worlds together more solidly. Phone placement ended up where it was for the sake of nighttime lighting, but it was at a slight distance from the installation. I doubt that everyone realized the connection between the two elements, though people were keen to interact with them both. The connections were not made explicit…it required some imaginative and contemplative work on the part of the viewer/listener, which was always a part of the project’s overall design.

I had excellent performers who occupied this strange little space I created amongst a few trees. They added to this sinister yet magical world by building more hanging garlands, reading from the library of encyclopedias, watching people from the trees, resting, being. I have to say, they all looked pretty killer too, wearing the shifty black bandit masks along with coveralls procured from the basement of Corney’s shoe store (a gold mine for odd costume needs).

Near the end of the night, I was approached on the plaza by Craig Mackie, who declared the piece to be his favourite of all of Art in the Open, which was an enormous compliment, and so appreciated. This photo is his. I’m thankful for it, and for the kind words. 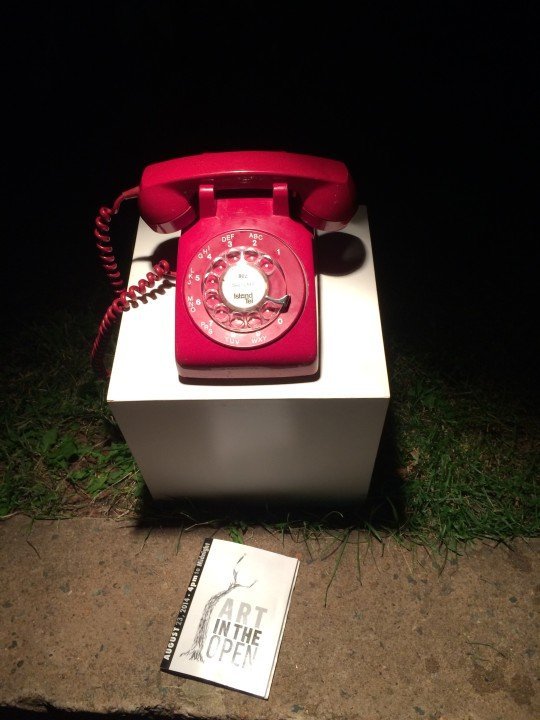 Andrew Hoffman took the photo below of Sam performing in the installation. 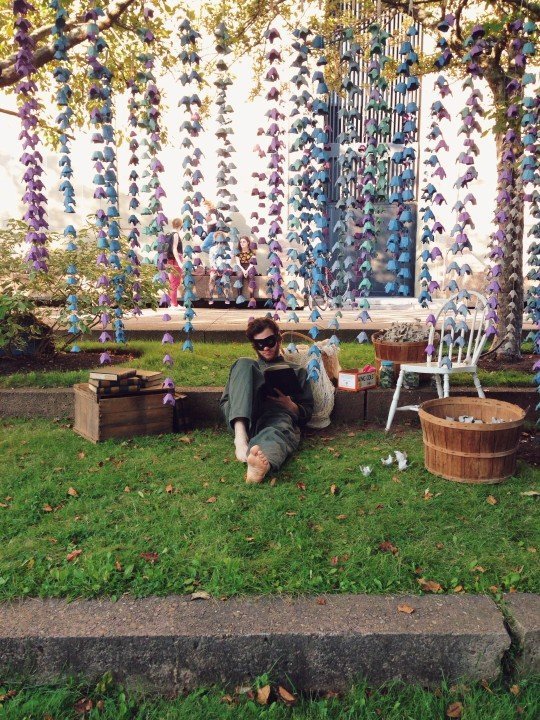 I must recognize the amazing technical help I had to realize this project. It could not have happened without the tinkering and sound-engineer expertise of Adam Gallant, who built the remote/ringer system, wired the phone’s insides to play audio from an iPod, and recorded the voice of Jan Rudd, who so softly and strangely whispered into the ear of anyone curious enough to pick up the receiver.

Pat Brunet and Patrick Callbeck helped with other logistical bits of the installation, figuring out lighting and materials with me. Matthew and I spent a lovely afternoon in my backyard dip-dying garlands. And one night Jenny, Sam and Andrew’s friend Sam all helped me make garlands, while drinking gin.

Already I’m thinking of ways to build on this for an AITO in the near future.